Omaha, NE— A new technology could soon multiply the amount of biofuels produced in the Midwest while it reduces CO2 emissions that many scientists think negatively impact climate change. Even better yet, the new advanced biofuel can be produced competitively at corn-ethanol facilities--without using more corn, says a chemical engineer speaking to the National Advanced Biofuels Conference at the Omaha CenturyLink Center.

Dr. Gary C. Young, P.E., President, of Bio-Thermal-Energy, Inc., of Cedar Rapids, Iowa told participants at the Conference that the new proprietary technology uses gasification to convert a stream of CO2 in combination with another carbonaceous feedstock into syngas, which can in turn be further processed with other commercially available technologies to produce electricity, process heat, or to produce methanol, ethanol, green gasoline, and/or higher value products. The B-T-E technology proposes to reduce and recycle the current waste streams of CO2 emissions from ethanol plants and other industries that many scientists say are causing harmful changes to the climate and then use the CO2 as an input feed for economical production of higher value products.

Young says that recent experimental demonstrations at a 12.5 ton per day scale conducted at a private third-party pilot plant facility has demonstrated the process works and shows that it may soon be possible to competitively double the amount of biofuel produced at an existing corn-ethanol facility without using more corn.

“The B-T-E technology could build a bridge between the ethanol industry and the natural gas industry to help reach national goals for energy independence at a time when certain parts of the world remain subject to terrorism and instability,” he said.

“The B-T-E technology may also be an important bridge between ethanol and environmentalists by reducing carbon emissions into the atmosphere,” said Young.

Concerns about climate change have been increasing with an apparent rise in the number of recent natural disasters and weather related events such as Hurricane Sandy, droughts and forest fires. In May 2013, scientists for the first time measured an average concentration of atmospheric carbon dioxide of 400 parts per million in Mauna Loa, Hawaii, where the National Oceanic and Atmospheric Administration (NOAA) observatory is located.

Also in May, an Interagency Task Force of the federal government released estimates of social costs from carbon emissions projected for 2010 to 2050. For 2020, estimates of the social costs ranged from $12 to $129 per metric ton of CO2 emissions. Young says a typical 100 mgy ethanol plant generates 37.7 tons of CO2 per hour. If the plant deployed the BTE technology, about $3 million in extra revenue could be generated annually at a $10 per ton compensation rate. Recent media reports that California Air Resources Board (CARB) is proceeding with the implementation of a carbon offset incentive program in that state.

Young says the corn ethanol industry represents “low hanging fruit” for the new B-T-E technology because CO2 emissions into the atmosphere from the fermenters of a typical ethanol plant are 97 percent pure. As a result, it is an excellent feedstock for the CO2 conversion process that uses the waste stream in combination with another carbonaceous input--such as biomass, natural gas, coal, and coke—to produce syngas that would be used as an input for other products.

“If done right, the BTE technology could improve the economics of the Midwest corn-ethanol industry and at the same time turn it into the number one global carbon offset industry within a very short period of years,” said Young.

involving Earth Energy, which has investors including retired General Wesley Clark and John and Jeff Wooley from Austin,Texas, and American Green Gasoline, LLC, which has investors from Western Iowa and Northeast Kansas. Currently a third-party engineering design and economic feasibility study is being conducted to scale up to commercialization.

Woodbine, IA--American Green Gasoline, LLC (“AGG”) announced today that it successfully concluded a capital raise of more than $230,000 in April 2013 in a private placement to investors from western Iowa and northeast Kansas. As a result, AGG has entered into a joint venture with EE-CO2 LLC (“Earth Energy”) of Austin, Texas for the purpose of commercializing a CO2 conversion technology. The proprietary process was developed by Bio-Thermal-Energy, Inc. (“BTE”) and combines CO2 with other carbonaceous inputs-- such as natural gas, coal or biomass--to produce syngas for further processing into methanol, ethanol, green gasoline, and higher value products, or for electricity generation and/or process heat.

“We are excited about taking the next step with the BTE technology as we believe the technology holds great promise for using CO2 currently emitted into the atmosphere from ethanol plants, electric power generation facilities and other industries and then converting it to additional fuel, green gasoline, or additional electricity,” said AGG LLC spokesperson, Dave Stevens.

“The proprietary technology licensed to the new joint venture was developed by Dr. Gary C. Young P.E. of Cedar Rapids, Iowa, who has over 40 years of experience in the oil and gas, chemical, food, and pharmaceutical industries,” Stevens said.

“Dr. Young is scheduled to speak on the CO2 to syngas conversion technology opportunity at the National Advanced Biofuels Conference & Expo in Omaha coming up from September 10 through September 12,” Stevens added.

“While much of the media attention has focused on entrepreneurship and the venture capital raised in larger metro areas, this team effort is a little unique in that all of the investors in AGG are farmers and investors from rural America and communities of less than 15,000 in population,” Stevens added.

Stevens said that a third-party engineering design and economic study to determine the feasibility for commercializing the BTE technology is now underway. 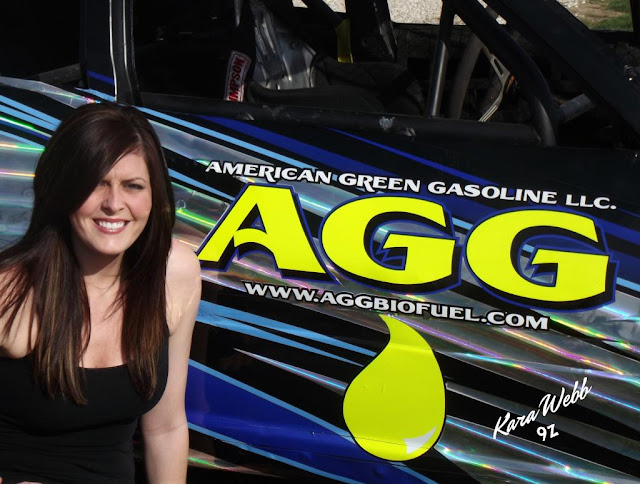 Kara Webb’s car of the Webb Racing Team has been sponsored by Nick Cleveland of Woodbine, Iowa featuring AGG Biofuel, a new venture working to commercialize more environmentally-friendly “green fuels” of the future. Kara Webb joins her two brothers, Ryan and Jesse Webb, this year as the “third wheel” of the Webb Race Team. Ryan and Jesse power their two race cars with 100% ethanol, and have had good results using ethanol. Best of luck to Kara in her first year on the racing circuit.
at 6:02 PM No comments:

Ames, IA.-- “American consumers, environmental interests, and ethanol producers should embrace a new CO2 conversion technology that could use the nation’s existing corn-ethanol and emerging cellulosic-ethanol industry as a platform to cut GHG emissions, double domestic biofuel production and produce green gasoline,” says Dr. Gary C. Young, President of Bio-Thermal-Energy, Inc.  “It is amazing to think that with this new technology, we now have capability to take waste CO2 emissions and turn it into a fuel source for green gasoline that could double the output of an existing ethanol plant without using more corn and without additional government subsidies.  But, that is exactly what this new technology can do,” said Young, who is a Ph.D. level chemical engineer with over 40 years of experience in the oil and gas, food, pharmaceutical, industrial chemical and agricultural chemical industries.

Young said his new technology was prophesized by Dr. George Olah, who won the 1994 Nobel Peace Prize for work on carbonation chemistry as a future source for energy and economical fuel as existing energy reserves are used by a growing world population and economy.  Young made his comments to 120 university and community leaders in Ames Iowa at the Noon Rotary Club.

“First generation corn-ethanol plants and next generation cellulosic ethanol plants are ideal sources of CO2 because their fermenters produce a relatively pure source of CO2,” stated Young.   “The CO2 can be combined with a variety of other carbonaceous inputs such as biomass, coal, coke, or natural gas and used to produce syngas which can be converted to a variety of fuels including green gasoline using commercially available technologies,” he said.

Young’s technology has been demonstrated and experimentally verified, at a 12.5 ton per day scale on a private research pilot plant in Pennsylvania.    His technology is licensed to Earth Energy LLC, an investment group from Austin,Texas, led by retired General Wesley K. Clark and John Wooley.  They are working with an Iowa-based group, called American Green Gasoline LLC, to finance a third-party engineering, design, and economic feasibility study.  The group plans to engage Technip, Stone & Webster, an international industrial engineering company, with offices in Houston and Claremont California to do the feasibility study and design plans with the intent to develop the first commercial scale project for co-location at an existing ethanol plant that will potentially be located in Iowa.

“With the amount of CO2  that would potentially be taken from ethanol plant emissions and used to produce more transportation fuel, this technology could potentially turn the existing ethanol industry and Iowa into a model for further CO2  reductions addressing climate change mentioned at the President’s Inauguration,” Young said. “Iowa accounts for 26 percent of the national ethanol production and would be an ideal state for constructing the first commercial plant using the technology,” he added.

Young is a native of Nebraska and received his chemical engineering degrees from the University of Nebraska.  He retired from industry, and authored a textbook titled, “Municipal Solid Waste to Energy Conversion Processes” published by Wiley in 2010, before embarking on his current venture in CO2 conversion.  He presently lives with his wife in Cedar Rapids, Iowa.